Akshay Ruparelia, an extraordinary teenager, has a net worth of £12 million (Rs 103.4 crore), landing him the title of UK’s youngest millionaire. Ruparelia parents were born in Gujarat, but had fled to the UK due to regional tesnions.

Akshay Ruparelia’s parents suffer from hearing impairment, but this didn’t restrict the teenager from moving towards the ambitions he sought. Unlike other school going children, this 19-year-old utilized his school lunch breaks to negotiate business deals.

When his family moved to greater London over 7 years ago, they paid a top dollar estate agent fees. This triggered the idea of a low cost bearing business, giving birth to an influential real estate empire – Doorsteps.
With the official take-off of Doorsteps in December 2016, the agency combined both online, and offline tools to reach out to prolific buyers. 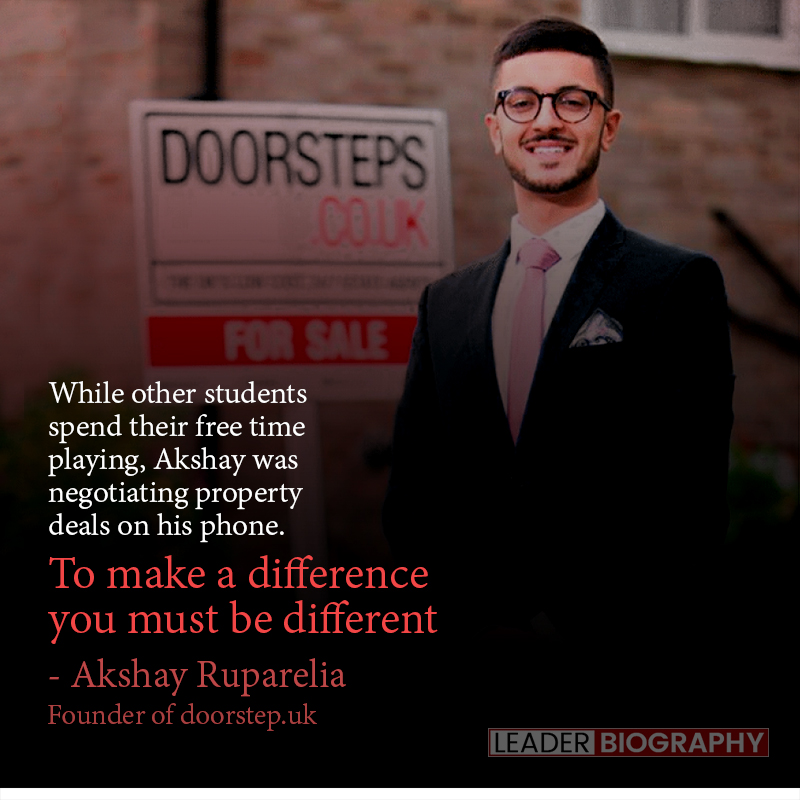 Being a rookie, Akshay followed successful brands like Uber, and Amazon to learn disruptive business tactics. When questioned about what attributed to the success of his business, he says, “Instead of the average 2 to 3 per cent commission most property agents apply to a sale – which, on an average, amounts to about £10,000 for a London property, according to Ruparelia, Doorsteps charges just £99.”

Akshay’s success can be dedicated to the competitive pricing strategy he laid for the properties. A £7,000 loan that Akshay took from his relatives marks the humble beginning of his business. Sixteen months after its launch, doorsteps.co.uk has become the 18th largest estate agency in the UK. Selling over £100 million worth of property, the future of the company looks promising.

When questioned about the prospects, the young entrepreneur said that Doorsteps aims to transform the “archaic and backwards” UK real estate market by offering a 97% discount on home-selling. Akshay also wants to extend his business projects in homeland. He says, “I would be overjoyed to have Indian-origin investors as part of our next round of funding of £5 million to potentially disrupt the vertical landscape of the UK property industry and become number one. If this happens, I would find myself in India/Gujarat, more often, with pleasure.”
Already having a firm with 0.5% of the UK market, Doorsteps will certainly establish its prominence. The story of Akshay Ruparelia inspires every young heart to keep working for their ambitions.